What Obama (Still) Does Well

Most Americans probably do not know who Dorothy Height is, but her patient activism in the civil rights movement--not to mention her signature hats--made her one of the iconic figures of the modern struggle on behalf of black Americans and women's rights (background-woman in hat):

The fact that she was one of the few remaining leaders of the Movement, and whose death represented the passing of an era, was manifested by the number of Administration officials (including the POTUS) who attended her funeral today: 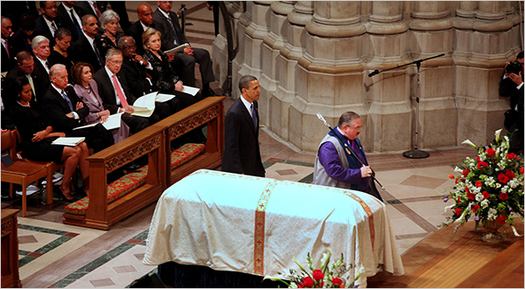 But to my point: read Obama's eulogy to remind yourself of his greatest strength, and why, I hasten to add, the Republicans do not have not a mountain to climb but the entire Alps to traverse before they get more black Americans to take them seriously as a political party.

One could also say that black prejudice against the GOP is not good for the black community.

Alas, too true. But then again, it simply raises the question of what statesmanship on the part of the GOP should look like if it seeks to become a sustainable majority party worthy of the mantle of Lincoln. I should think that finding a discrete and sizeable prejudice in the population that unduly hampers the party's efforts to do good for the nation would lead at least a few of the party's standard bearers to attempt to dislodge that prejudice. Of course, it takes two to tango...