Posted in Presidency by Roger Beckett

It is amazing to watch a President of the United States continue to be so thickheaded about something like golf. This has turned into a liability for him, and he doesn't even see it. Michael Ramirez does: 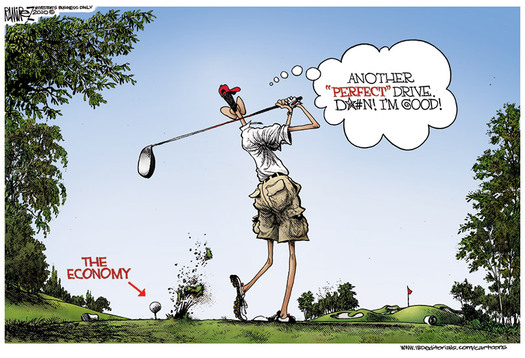 But what is even more amazing is that his thickheadedness extends well beyond how he spends his free time. It looks like he is about to spend this week digging himself even deeper: a Sunday clarification of his comments on the Ground Zero Mosque (which he shouldn't have even waded into in the first place, and unless he is going to contradict himself, he should stop making a bigger story of it), a Tuesday visit to Louisiana to commemorate Hurricane Katrina (you would think that at least one of his advisors would tell him that after the Gulf oil spill on his watch, he really won't be able to score any points against Republicans and George W. Bush on this one), and a Tuesday evening Oval Office address on foreign policy (violence is escalating, we are leaving, but this is somehow good). But yes, d★#m, he really is good -- but it looks like he will continue to be even better for the Republicans.
Categories > Presidency
11:57 PM / August 27, 2010
Trackbacks | Discuss (1) | Share | RSS

Obama's very eerie ability to "detach" himself from reality is a strong indication that this guy has a mental disorder. It is not liberalism - it is far beyond liberalism. His childhood was completely abnormal and contained very unhealthy environments - from his drunken father who never took any responsibility for any of his offspring to his grandfather, who named Obama's mother Stanley because he wanted a boy instead of a girl, to his mercenary step-father Sotetero, and his weird, weird relationship with Frank Marshall Davis and then his dedication to Rev Wright, until it became necessary for Obama to unload that baggage, Obama exhibits all the traits of an adult raised in a dysfunctional, abnormal environment. He is not mentally well. It is more than obvious. Giving him the privilege of being President of the United States is like giving booze and the keys to a 1968 Mustang GT to a 16 year old.