Posted in Courts by Justin Paulette

In "A Man for All Seasons," Thomas Cromwell exclaims of St. Thomas Moore, "His silence is deafening all Europe" So too is Justice Clarence Thomas' silence apparently deafening the NY Times, which notes that Tuesday will mark five years since Thomas has spoken at oral arguments. The Grey Lady is somewhat critical of this silence, implying that Thomas might be failing to perform his duties (expect this line of reasoning to crop up at the next Common Cause rally as a justification for impeachment - before they offer to "lynch him" again)

I've had several opportunities to meet Thomas, and he was open and sincere about his reluctance to speak at these events. For the most part, they are merely oral reiterations of written briefs formerly submitted to the court. Further, the questions are often not aimed at the lawyers, but the other judges. I expect Thomas would reply that he respects his fellows well enough that his disagreements with them can be sufficiently expressed in his written opinions - to which they are free to join should they be so moved.

Yet it's interesting to note the stark contrast between Thomas and Scalia. The latter of the originalist stalwarts talks more than anyone else on the bench. But Scalia is Italian. God bless him, he'd fit right in at my family get-togethers - you gotta talk loud if you wanna get heard, and Scalia's always got something to say. (His jocularity also provokes more laughter than any other member of the court.) I assume he talks principally just so as not to get board. If only they served pasta, ciabatta and a little wine during orals, he'd probably quiet down a bit. 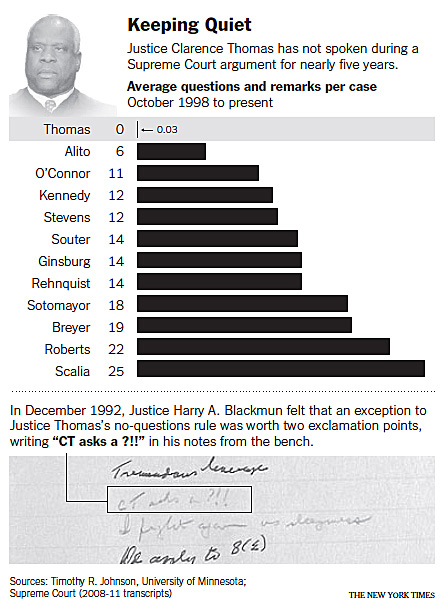 I am reminded of a story.

One Paul Engle was a teacher in the English Department at the State University of Iowa in 1947. He wrote the following about one of his students:

"Sitting at the back of the room, silent, [she] was more of a presence than the exuberant talkers who serenade every writing-class with their loudness. The only communicating gesture she would make was an occasional amused and shy smile at something absurd."

That silent student was Flannery O'Connor.

I think I get your idea now, Justin, and it was more brilliant than I ever could have imagined.