Abortion in the Big Apple

Posted in Bioethics by Justin Paulette

60% of black children in New York City are aborted. Indeed, 78% of Planned Parenthood abortion clinics are located in minority communities. A pro-life group advertised these facts with a Manhattan billboard: 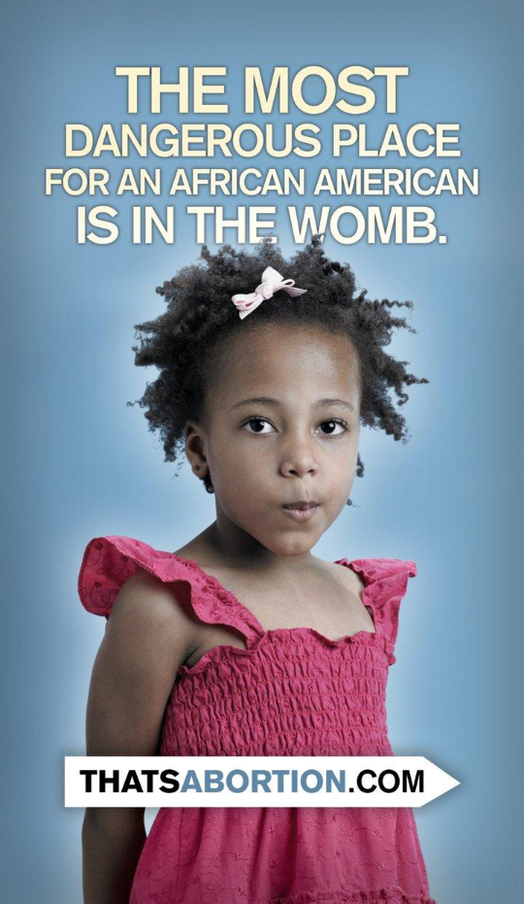 The abortion industry immediately decried the message and, apparently in solidarity with Wisconsin's unions, threatened violence if it were not removed. Planned Parenthood managed to rouse up a degree of horror and indignation which was quite lacking during revelations that their clinics fostered child prostitution. Rather than remove the plank from their own eye, the abortion giant responded by lobbying for legislation to drive non-abortion-providing pregnancy center competitors out of business.

I previously lamented the world-wide gendercide effect of abortion on women, the 50% national abortion rate among blacks and the the Democratic party's support for "post-birth abortion. The tragedy of abortion not only kills its direct victims, but seems to mortally degrade the virtue and conscience of its practitioners and advocates.

We have Margaret Sanger - Miss Negative Eugenics - and the feminists that still live among us to thank for the lie of abortion. I volunteer at a Pregnancy Resource Center and see the results of free sex and "just get an abortion". It is not a pretty sight. Reality is much different from "do it if it feels good".

Every year Planned Parenthood gives out the Annual Margaret Sanger Award recognizing leadership, excellence, and outstanding contributions to the reproductive health and rights movement - aka ABORTION. Some of the receipents:

I am sure at some time Planned Parenthood will put Gosnell on the list. Maybe before he is executed for murder.

These people should be proud of the damage they have helped cause poor, minority woman.

That girl pictured looks to be at least 5 or 6, and couldn't possibly fit inside a womb. But perhaps she should be warned to steer clear of any and all wombs.

Actually the biggest danger to her is the bus driver in the white house, the democrats, liberals and progressives as they want to keep her on the plantation as the saying goes....

What's with the "bus driver" bit? Where did that come from? Is that as close as the tea-partiers can get to "shoe shine boy" and still hope to maintain a plausible deniability as to the source of their vitriol for Obama?

Re Craig Scanlon's idiotic remark above -

Do you really not get it? Or are you just making any stupid remark so that you don't have to admit the obvious? The little girl pictured was 'lucky' to get out of the womb she once was in (as we all were, once) alive, thanks to the efforts of the left to convince the public that human beings who happen to be small, defenseless, and inside their mothers' wombs, are eligible to be slaughtered at will.

This does not end well.

Obviously you don't pay much attention to the bus driver in the white house. He uses people and when he is done with them, he throws them under the bus, hence, the bus driver.

But if you're driving the bus, why throw something UNDER it? Wouldn't that just make it harder to drive? Maybe tossing them in the ditch - or some nasty, polluted canal - would make more sense? Toss 'em in there like some sort of evil video game console!!!

I might toss video games under the bus, but YOUR Savior in the white houses tosses people. Daily. But in the bus drivers' case I guess you could called those people "mistakes" and label them a late term abortion.