This morning, I thought the New York Post and the Daily News pretty much nailed it: 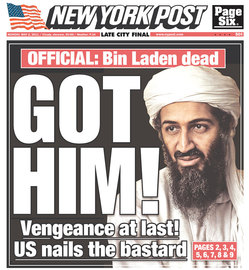 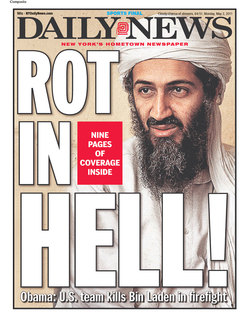 Then, as only he can do, Michael Ramirez comes along and sums it all up: 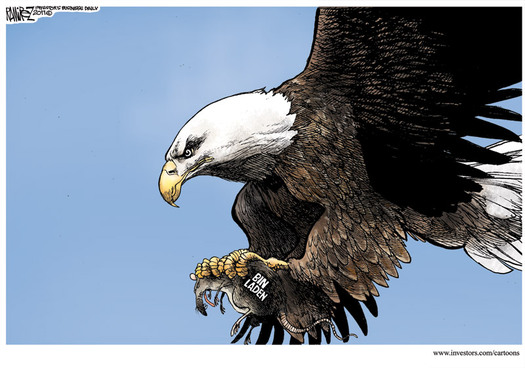 Oh, the memories - the right cranks out so much insanity, it's easy to let things like this fall into the memory hole after a couple years:

"...as only he - or a high school freshman raised on Limbaugh, and with some decent drawing skills - can do, Michael Ramirez comes along and sums it all up."

Happy to fix that for ya. I understand that Ramirez agonized for several hours about whether to put a huge (but completely not gay) e-r-e-c-t-i-o-n on that eagle. Good to see he took the classy path.

Why are none of you commenting on the rather odd treatment of the body after the mission? Is this what we do with enemies we have hunted for a decade? Really? I'm sorry, something's not right here. I'm not conspiracy-minded by nature (generally hate such people), but for the life of me I can't think of a single valid reason for discarding the body so quickly.

Missing bodies of messianic figures are ALWAYS a problem. My God, who's doing the thinking in Washington these days (oh, wait, I know that!).

I'm sure Obama will get a popularity bump for this, but it will be ephemeral. By next year people will have forgotten about this small belated victory in the war on terror, particularly if gas prices remain outrageously high and the economy staggers from failure to failure.

Now the put-down of Ramirez I won't agree with. Editorial cartooning is a difficult craft -- particularly one panel cartoons with no dialogue. It requires skill to wordlessly capture a sentiment in a single frame. Try it. Then try to sustain it day after day for a week. You'll quickly come to understand how difficult it is.

* * *
As for the disposal of the body -- yes, odd. But I'm not sure what the alternatives were. Parade the body as a trophy of conquest? Wrap it in a pig carcass and bury it in Israel? Those, clearly, would have caused more problems then they solve. Turn the body back over to his Saudi family? The world would collectively scratch its head and say, "Why?" The burial at sea seems the best of a bad set of options -- and there's a sense of eerie emptiness about it.

* * *
Do we have any sense whether Bin Laden was still active in any way in organizing terrorist networks and activities? I'm serious. Or was he essentially a feeble figurehead of the glory days of a decade ago?

Only a liberal could come up with that one.

There was no good choice but the sea burial. Which country wanted OBL's remains? We certainly did not wants his remains on US soil. It would cause no end of trouble. Given what Muslims do when offended-- we don't want to bury him here, do we? Then who would want him? We wouldn't want to give him to any nation that did want him. Even any nation associated with him or his family, Saudi Arabia, for example -- do we really want them to take him, bury him (how?) and have his grave be a place of consecration for years to come? He's got his faithful following and they would have to deal with them. Who wants to? Any nation that did we would not want to to have him.

Let's also take a brief moment to reminisce. Here's what George W. Bush - the man whom most or all of you NLTers voted for twice and whom was applauded so much by bloggers here and elsewhere as a manly cowboy figure - said at a March 13, 2002, press conference, only 6 months after his macho b.s. "dead or alive" blustering:

Q: But don't you believe that the threat that bin Laden posed won't truly be eliminated until he is found either dead or alive?

...and then it was time for Iraq and Saddam's diabolical (so diabolical, they're invisible!) Weapons of Mass Destruction.

But should this really surprise anyone? After all, Bush was also the guy at the helm on the day the USA suffered its greatest ever terrorist attack. You didn't forget that, did you?

Watch it here for yourself:
https://www.youtube.com/watch?v=LR09ELf5suM

Scanlon, you're a jackass. Anyone who knows the history of OBL and the CLINTON White House understands that Slick Willie set us up for that attack. How many times did he have the opportunity to kill the bastard, and how many times did his nerve fail him? So the notion that 9/11 was on Bush's watch (only a few months into that watch, BTW) is ludicrous and hyper-partisan. But of course we've learned to expect that of you.

As for burial at sea, it is fishy (forgive the pun) to discard the body so quickly. Both our friends and our enemies need proof of his demise, and discarding the body so quickly only breeds conspiracy theories (I expect to hear reports of joint sightings of Elvis and OBL any day now). My personal view is this: We executed him, and any forensic analysis would bear this out, so Obama and Co. decided to disallow any such analysis. Once again, our PC sensibilities interfered with our best interests! If we were willing to "murder" him we should be willing to admit it.