Posted in Military by Robinson O'Brien-Bours

I spent much of the weekend walking around Washington with some visiting family who had never been before. It was a beautiful fall weekend, the trees along the National Mall standing in perfect shades of autumn--such as in the picture below, taken around the Korean War Memorial. There happened to be a large amount of war veterans, too, on the Mall this weekend as part of some organized tour of the memorials. Mostly veterans from WWII and Korea, and it was a sobering sight to see these old warriors staring at that black wall, standing beside those soldierly statues, and gazing around at the water and pillars commemorating the last world war. Volunteers, made up of veterans from more recent wars in addition to civilian volunteers (including, it seemed, most of the Miami-Dade fire rescue team) were pushing them around in wheelchairs, or at least trying to. On more than a handful occasions I saw the old men themselves pushing their empty wheelchairs and walking alongside their assigned volunteer, refusing to be pushed as they walked around the structures we have established to honor their service and the dead. Good for them. Even in their own autumn years they do not expect any special treatment for the tremendous service they gave us. May their memorials forever stand to remind us of what fortitude men are capable of. 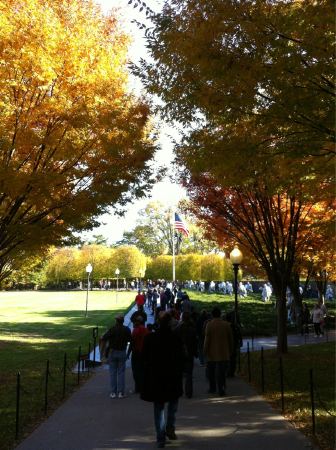 "Even in their own autumn years they do not expect any special treatment for the tremendous service they gave us."

There is an old saying regarding rank--"the senior never thinks about, the junior never forgets it." Therefore, it is sometimes fitting and proper for a veteran to decline special treatment, for it helps preserve his character.

It is also fitting and proper for it to be offered in the first place. Too often the phrase "he doesn't think of himself as a hero" is used so that he won't be treated as one.

God Bless all of them.