Posted in Religion by Justin Paulette

Israeli archaeologists have discovered a 2,000 year old clay seal that seems to have been used in rituals performed in the Temple of Jerusalem. Aramaic lettering on the seal reads, "Pure for God," and may have authorized an object for use during rituals.

The find marks the first discovery of a written seal from that period of Jerusalem's history, and appeared to be a unique physical artifact from ritual practice in the Temple, said Reich, co-director of the excavation.

Very few artifacts linked to the Temples have been discovered so far. The site of the Temple itself - the enclosure known to Jews as the Temple Mount and to Muslims as the Noble Sanctuary - remains off-limits to archaeologists because of its religious and political sensitivity.

One wonders what other artifacts await discovery in the Holy Land. 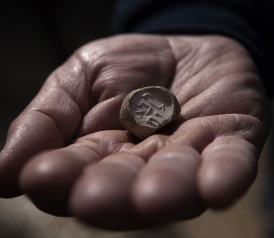 "One wonders what other artifacts await discovery in the Holy Land."