The Economist runs an article citing that "Germany's eastern policy has never been stronger." I've long been an advocate of a New European reorganization which promotes Central Europe as a pro-American, fiscally-responsible political bloc between the Old Europe of the west and Russia's continuing sphere of influence in the east. I thus find it promising that Germany - the unrivaled engine of the European economy - "trades more with Poland's healthy economy than it does with Russia's sickly one" and that "once-communist countries such as the Czech Republic are closely linked to German industry's supply chains--more so, in fact, than some 'western' neighbours like Belgium or Denmark."

Of course, the nations of an emerging Central Europe are diverse and often raise competing interests - as the article aptly notes. But of particular interest is this note on influences across Europe:

The result of America's power vacuum is that it "gives Germany more diplomatic space." And insofar as German entanglements continue to shift eastward, the strengthening center of Europe could prove greatly to America's interest. This is a win-win situation for the U.S., which can take a laissez-faire approach to Europe and still end up with a pro-American result. All we must do to seize this opportunity is to not actually antagonize our would-be allies - a feat which has thus far proved beyond Obama's ability.

P.S. The title of the article is "Love in a Cold Climate." Fittingly so. Here is Prague: 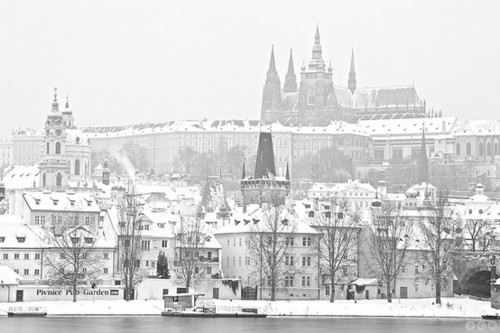 Those wanting to better understand the sociopolitical details of just how Germany has become "the unrivaled engine of the European economy" could only benefit by reading this (link provides a convenient get-around to an article that otherwise requires a Harper's subscription - I'm guessing not many of NLT's readers have those!):

"All my life as a labor lawyer I have read the same thing in The Economist, about the United States and its wonderful labor-market flexibility. What they mean is: Unlike the Germans, U.S. working people are completely powerless. But it's precisely because of our labor-market flexibility that we can't compete. Our workers have been flexed right out of their high-wage, high-skill jobs and into low-wage, low-skill jobs. That's bad for the workers, of course, and it's also bad for the economy. The German model—with worker control built into the very structure of the firm—keeps bosses and workers in groups, rubbing elbows with each other, and sometimes just elbowing. It creates a group interaction that over time builds and protects what economists like to call human capital, especially in engineering and quality control. It's precisely this kind of valuable capital that our atomizing "flexible" labor markets are so good at breaking up and dispersing.

Yes, there's much to like about the U.S. model. In global competition, the United States has almost every comparative advantage over Germany. We spend vastly more on basic research than the Germans do. We have much more land, more labor, more capital, much higher levels of formal education. But with our flexible labor markets we cannot develop human capital or knowledge to wean ourselves away from turning out crap and leaving the high-skill manufacturing to the Europeans. The one great comparative advantage of Germany is that it is a social democracy. Germany has its problems, and I take them seriously. But I'm also sure that German companies will lead the next industrial revolution, the "green" one, while we in the United States will merely watch."

So the Germans have the upper hand in Labor Law, Business Association Law and Criminal Law and all these advantages in respect for the rule of law have a huge impact upon the economy.

It is just the best civil law system in the world, specifically designed also for an engineering type of people.

There is also a strong federalist component to german law, and germany is still dealing fairly well integrating east germany. What is actually somewhat amazing is the low incaceration rate.

The percentage of folks you have to deal with by throwing in jail is a good indication of the extent to which the rule of law is followed without resort to force.

The Germans understand that you can only regulate wealth, so they jump right into regulating it, and even the lowly worker gets a say in the policy of the board of directors.

Everyone is more or less regulated via labor law, even the prostitute, and all these unions "police" standards, and ensure a sense of fairness/voice and respect for the law.

Labor Law is huge in Germany, but Criminal Law is not. The Unions, perhaps like NCO's in the army, keep wollybrained nuckleheads out of criminal trouble and on the right track. Everyone is more or less professional, or expected to be professional. (Thesis)

America needs to send a de Tocqueville to Germany(or France for that matter) on a mission to examine the penal system and discover how they have such a low incarceration rate. I suspect it has something to do with this so called social democracy.

As for that last bit about Germany's green/industrial revolution, this article offers more compelling facts.

"Germany's electricity sector delivers 21 per cent of its power from renewable sources, such as the wind and the sun. Just 8.5 per cent of Australian power is provided by these sources, despite the fact that our continent has them in spades compared to the Germans."

...and that reality in Germany has been evident to me every time I fly into or over Germany (at a low enough altitude, of course!). Even the smallest villages have just about every roof well-covered in solar panels.

Again in part it is necessity and a lack of natural resources, that have sort of forced/shaped German policy.

Electricity is more expensive, but most of that cost is really going right back into the german economy.

(personal bias) It is easier to be pro-solar if you live near Perrysburg, OH and you realize that First Solar is the best local employer.

Some folks don't realize that the U.S. now exports ethanol (to Brazil of all places), in part because of policies that made the development of this tech work out as a business proposition until it could stand on its own.

In my opinion, Capitalism is really all about the legal structure. If you are more about being an engineer (like the germans) you can design laws/policies which favor technological solutions. You can create/cultivate markets and goods which didn't previously exist, or which wouldn't have existed, under different incentive structures.

""[This] paper makes an attempt to estimate the external costs avoided in the German energy system due to the use of renewable energies for electricity generation..."

Look on a comon sense levels when I see papers like this or even papers from say Heritage, or any of the millions of fairly smart papers that exist out there, I see people like myself(maybe/mostly smarter) that basically turned this out as a work product.

I think of it the same way when I see a solar panel. I think of a neighboor who works at First Solar. Expensive, maybe not as economically efficient as coal... but it is a job in industry. It is also somewhat important to me that it is green (i.e. avoids certain worse externalities).

There is a pretty steep opportunity cost in really figuring out how expensive or wasteful this "green tech" is...and what you are really producing is economists and lawyers, who are telling you how expensive it is!

Huge benefit...is it the best policy? By the time you get around the answering this with specificity, you have already dumped a ton of labor into the question. (It really isn't funny how much the U.S. spends on lawyers and economists)

When I hear folks complain about the efficiency of solar or other green tech, I consider it almost a systemic misfortune that they are right. They wouldn't actually be right if we hadn't spent an ungodly amount of work product in areas like economic/financial/legal innovation.

So our legal structure might not be pushing capital to the right spots.

Certainly by getting rid of an industrial base we are pushing human capital to different spots...and this results in a lot of the financial innovation that ends up maybe being ruinous.

So there is no guarantee that the sorts of ineficiencies in the German economy, that right leaning economists point towards aren't really low hanging fruit, that don't actually result in bad consequences systemically.

The information economy has its limits, and it really means more and more folks who "create" information.

How is the creation of information that solar is inefficient on some narrow set of ceteris paribus assumptions(or not, God help us in terms of cost the more information we want), not itself inneficient when compared to the solar panel?

I think the U.S. is probably sustaining a culture of excuses.

So I think Germany is very efficient at a macro level.

Maybe, Maybe not. I think the Geographic Economics of Krugman is fascinating and his work on (NTT) might even suggest that the Germans are unique. Economies of scale are huge. The Germans can make Green Tech work in part because of international trade. They can export it, which dramatically changes the "value" proposition.

That is even if high speed rail is inefficient short run(it is more efficient in Germany), it gets exported to China (where it may in fact be a stupid idea of the communist/capitalist/civil law gov.) long run. But the Germans make a mint.

Because we aren't the first movers, we may not be able to recoup costs the way the germans have...

Lets put it this way, I think the German green/industrial economy is less flimsy and more sustainable(certainly more tangible) than the american information/cloud/blog economy.