Posted in Environment by Justin Paulette

Allow me to follow up on my post on the Volt and its $250,000 / car taxpayer-funded subsidies by citing John Hinderaker's Power line post on ExxonMobile's good citizenship. He notes:

The Obama administration has devoted more energy to demonizing the oil and gas industry than just about anything else over the last three years. It has done this partly to deflect blame for its own lousy performance on the economy in general and energy costs in particular, and partly to justify transferring wealth from taxpayers to its cronies and supporters in the "green" energy sector.

Currently, the administration is campaigning to eliminate oil and gas "subsidies." The first question is what this means; when liberals talk about "subsidies" in this context, they usually mean the same routine tax deductions that are available to businesses generally. To the extent that there may be any actual subsidies, they are extremely minor. So, by all means, let's do away with them, along with subsidies for all other types of energy. Let's allow energy technologies to compete in the marketplace on their own merits. What would the effect of eliminating all energy subsidies be? Not, I am afraid, what the Obama administration has in mind. This is a slide from my Cronyism 101 presentation: 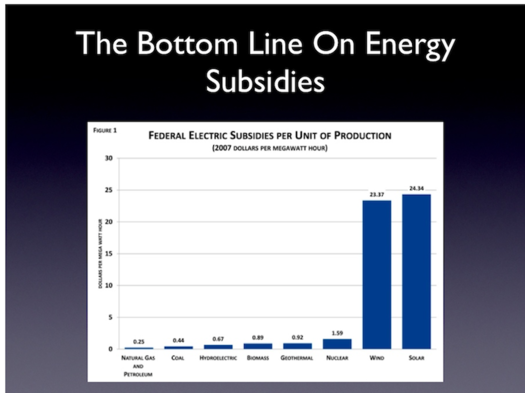 The administration demonizes disfavored American citizens, companies and industries as a tactic to increase its own political power, and slide money to its cronies and supporters. In the long term, this may be the most destructive legacy of the Obama administration.