Obama formally launched his re-election campaign this weekend at Ohio State University, and the occasion bodes well for Republicans. As the Columbus Dispatch reports:

...the event fell short of the 20,000 supporters the campaign had forecast as organizers moved people from seats to the arena floor in front of the dais to project fullness to television audiences. Obama volunteers had worked feverishly over the last week to gin up a crowd, making multiple calls to residents believed to be supportive of the president.

Twitter was abuzz with photos and comments about vast areas of empty seats in the arena's upper deck.

One such photo is below. 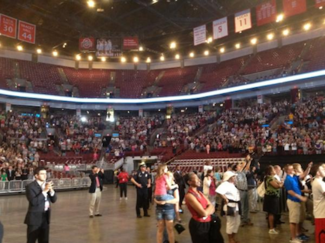 Obama's first-term celebrity status and the excitement with which it was accompanied has vanished. He will thus be forced to rely upon his record in order to compensate for the loss of enthusiasm among his erstwhile constituency. That effort was not helped by Friday's news that the "portion of Americans in the work force is at its lowest percentage since 1981." Coincidentally, 1981 would be the year that Carter conceded defeat after a single term in office to Ronald Reagan.The Obama-Carter parallels continue to arise.

The Obama campaign's efforts to divide the nation and distract voters from the economy have thus far fizzled and failed. Such attempts have proved uninspiring and ripe for mockery, such as the ridiculous claim that Romney would not have killed Bin Laden, parading out a government-dependent, ward-of-the-state power-point character named Julia as the latest evidence of a "war against women" and declaring the campaign motto to be the socialist-styled, "Forward" (to which Romney promptly replied, "What, off the cliff?).

Obama's campaign is off to a rough start. Voter disappointment in his weak record of accomplishments and America's continuing economic slump weigh against Obama's favor. As Ohio reveals, the election is practically tied at the moment (an unenviable situation for the incumbent candidate) and Obama faces a strong head-wind.
Categories > Elections
7:32 AM / May 6, 2012
Link to this entry | Trackbacks | Discuss (0) | Share | RSS

Posted in Elections by Robinson O'Brien-Bours

Julia has been the talk of the town here in Washington lately. President Obama's reelection campaign has come out with the "Life of Julia" on the campaign website, contrasting how Julia's life under President Obama would be different than under a Romney presidency. The Heritage Foundation has retorted with "A Better Life of Julia" on its website, while some libertarian-minded friends of mine have come up with their own vision of Julia's life here. All tell the tale of Julia, a name that has even been trending on Twitter of late. Biased as I am, though, I think the better story of Julia is told in this song by Chantal Kreviazuk and my uncle Johnny. The pair were sitting in a restaurant somewhere in Hollywood some years back and saw Julia Roberts at another table, so they decided to write a song about the pretty woman from Pretty Woman. Interesting refrain of the song, given the current use of the name: "Do they use you and then lose you/When you get scared again?/They could never forget you/But they could say they said your name,/Julia." Then there's always the song by the Beatles. "Half of what I say is meaningless/But I say it just to reach you,/Julia." Yes. Let's stick to the songs.
Categories > Elections
3:53 PM / May 4, 2012
Link to this entry | Trackbacks | Discuss (0) | Share | RSS

What Are Young People Thinking?

In today's New York Times, Charles Blow highlight a survey released this week by Harvard University's Institute of Politics which "asked respondents ages 18 to 29 to choose between pairings of issues to determine which ones they felt were more important."

Among domestic issues, creating jobs almost always won, while combating climate change almost never did. Immigration is also a losing issue (except when paired with climate change), while access to affordable health care is a winner.

"Reducing the role of big money in U.S. elections," a reference to the Citizens United decision which liberals had hoped to convert into a powerful election issue, also seems to be a non-starter among the young. One must doubt whether Obama's ruckus over student loan interest rates will have any effect, as well.

On the foreign affairs front, the youth vote cares about withdrawing from Afghanistan, combating terrorism and preventing a nuclear Iran. They are not particularly concerned about North Korea or solving the EU's troubles.
Categories > Elections
7:53 AM / April 28, 2012
Link to this entry | Trackbacks | Discuss (0) | Share | RSS

Quote of the Year

I nearly missed this one from Michelle Obama a few days ago:

"This President has brought us out of the dark and into the light."

I must say, Barack found himself a devoted and faithful bride in Michelle. This administration has a record that only a mother could love. But Michelle is still praising her man with psalmic reverence.

...who hath called you out of darkness into his marvellous light.

The Biblical quote references the messiah, though one wonders if the same is true for both quotes. Perhaps Michelle would subscribe to the whole verse, with minor substitutions:

But you are a chosen generation, a kingly priesthood, a holy nation, a purchased people: that you may declare his virtues, who has called you out of darkness into his marvelous light: Who in times past were not a people: but are now the people of [Obama].

After all, until Obama's ascension, America was a nation of "uninvolved," "uninformed," "complacent" "cynics" and "sloths," who were "guided by fear," whose "souls are broken" and who were "just downright mean." Michelle had never felt pride in America until Obama was elected. So it would not be difficult to imagine that America is now a chosen generation, a kingly priesthood, a holy nation, a purchased people, because it has declared Obama's virtues and become his people - a people called out of the darkness and into his marvelous light.

Is such an interpretation any less delusional than the claim that Obama has somehow delivered America out of darkness and into the light?
Categories > Elections
1:36 PM / April 19, 2012
Link to this entry | Trackbacks | Discuss (1) | Share | RSS

The race for president shifted dramatically Friday into a general election matchup between President Obama and Republican Mitt Romney as the candidates delivered dueling, sharp-tongued speeches about the president's leadership.

Santorum and Gingrich - and all who hope to see Obama as a one-term president - should now put aside grudges, vanities and distractions in order to support Romney's up-hill battle to unseat the incumbent. The rest of America has moved past the foregone GOP primaries and is focused on the general election - the GOP would be wise to immediately do likewise.
Categories > Elections
11:05 AM / March 31, 2012
Link to this entry | Trackbacks | Discuss (1) | Share | RSS

Posted in Politics by Ken Thomas

Tim reposts a thumbnail portrait showing what's right about Kansas (other than some silly regulation), on the day of the Kansas primary-caucuses. This reminds me of my quick visit to Russell, KS in 1996, home at various points of both Bob Dole and Arlen Specter. Be sure to hit the A&W Root Beer when driving through Russell!
Categories > Politics
12:20 PM / March 10, 2012
Link to this entry | Trackbacks | Discuss (3) | Share | RSS

It seems pretty certain now that Romney will take Ohio.  Momentum is on his side, and has been for days.  I talked to two people who were lukewarm in their support of Romney until the Rush Limbaugh comment (combine that with Santorum bringing up things the people have decided on their own a generation ago); now they are sure they want someone who is stable and predictable and conservative enough.  Obama has to be beaten, they say. And I just remind you that he was the conservative candidate against McCain last time around.  For what it's worth, I predict he takes Ohio by five points.  The rest of the states on super Tuesday are just numbers, but Ohio is a moral victory.  The rest of the primaries are mere details to this.  From now on Romney should talk only about his programs and why Obama should lose.
Categories > Elections
5:07 PM / March 5, 2012
Link to this entry | Trackbacks | Discuss (6) | Share | RSS

"Given the increasingly likelihood that Romney is on his way to the GOP nomination," Steven Hayward has begun "Deconstructing Romney" over at Power Line. The theme of his first post contemplates his hope that, while Romney is far from a conservative star, "maybe he'll sell out to us."

It's a somewhat sad commentary on the times that the conservative movement must hope that our soon-to-be standard-bearer will betray his ostensible principles and pursue conservative policies. Obama was a far-left liberal who pretended to be a moderate during the campaign and subsequently governed as a far-left liberal. Nothing surprising there. Romney is a moderate running as a conservative - the manner of his actual governance is completely open to speculation.

I don't have much to say on the Florida primary that hasn't been said by others.  My assumption is that the creation of majorities in our republicis--has always been--a messy business, and we shouldn't be surprisedthat this GOP primary is messy and blurry, made more so by anunimpressive media that focuses only on the fleeting.  Yet, the fog islifting now and it is becoming clearer that the only candidate who isboth a conservative and is able to practice the politics ofinclusion--of pulling folks toward his views on how to revivifylimited constitutional self government, and therefore creating a majority--is
Mitt Romney.  His impressive victory in Florida reveals this.  It is clear to me
now that he can and will cobble together a majority within the GOP because
he is a smart man, a conservative, and let us admit, a well balanced individual.
It is now also clear that his campaign is well run.  Gingrich, this so called man
of ideas--all of them disconnected from one another and almost blurted out
as his ungovernable will may demand--is ungraciously appealing to--as he calls it--people power instead of financial power.  This makes me feel as if I'm participating in politics of the
Philipines, instead of our constitutional republic.  This is not impressive and it is not conservative.  Gingrich, I should add, is  also tired, languid, and seems a bit desperate.  Romney should take the high ground from now on (he has made his point that he can be a tough guy)--as he did in last night's speech--and he will walk into the convention with a majority of the delegates and everyone will know he will have deserved  his victory.
Categories > Elections
9:36 AM / February 1, 2012
Link to this entry | Trackbacks | Discuss (12) | Share | RSS

Posted in Elections by Richard Adams

The Republicans should start right now -- pitching their campaign against "the do-nothing Democratic Senate." If they do so -- in, say, cheap radio advertisements all over the country -- it will throw a very large monkey wrench into the Democratic plan, and it will lay the foundation for their taking a large number of seats in the Senate.