A Constitutional Conversation with an Ohio Farmer

The farmer describes the book as follows:

We are not the oldest country in the world, but our written Constitution has endured longer than that of any other people. That fact is worth not only celebrating, but pondering.

This is especially important for members of Congress. As these letters have had occasion to observe, Congress is at the very heart of our experiment in constitutional self-government. In the Constitution, Congress comes first: it is Article I. Congress holds the law-making power without which the president has much less to do and the federal courts nothing at all.

The book's preface, penned on Constitution Day 2011, is worth quoting in full:

The American people have started a historic conversation - about the foundations, purposes, and scope of our government. In a spontaneous movement they rose to challenge long-established orthodoxies, and a sustained exertion of their sovereign power is changing the direction in which the country is heading. The movement began with no headquarters, no recognized leader, and no agreed upon platform. Thousands of independent groups of private citizens gathered in thousands of public squares across the land. Through all the diverse ideas expressed in these gatherings, one theme shone clearly: the federal government has, over the last several decades, stepped further and further outside the bounds of the Constitution.

How did our government get to this point? What would constitutional government look like? What paths are available to the people and their representatives for returning to constitutional self-government? These and related questions were taken up in a series of weekly letters sent to the 112th Congress over the past year, and collected here, as a humble contribution to this American conversation - a constitutional conversation in the broadest sense. The letters continue and can be read weekly at: www.ohiofarmer.org.

The Ohio Farmer is not one person, but a group of citizens seeking to preserve constitutional self-government in America. The Farmer's letters are written in the tradition of the Federalists and Antifederalists in the American founding who wrote newspaper articles debating the new form of government proposed in the Constitution of 1787. They wrote using pen names such as Publius, or Federal Farmer, or American Citizen, to allow their arguments to speak for themselves and be judged on their own merits. The letters from the Ohio Farmer are offered in the same spirit.

The Ohio Farmer is a project of the Ashbrook Center. The various authors who compose each letter from the Ohio Farmer are partisans in one sense: they are partisans of the constitutional self-government they regard as America's greatest gift to the world. The Ohio Farmer is not primarily concerned with immediate policy questions, though he necessarily discusses them; he hopes to refine and enlarge the public's view of the larger political principles implicit in our policy debates. He is a friend to all who love this country and wish it well; he is searching for that common ground that can unite all reasonable parties who wish to maintain America's glorious tradition of constitutional self-government.

Quote of the Day

A Physicist on Human Beings

Posted in Quote of the Day by Robinson O'Brien-Bours

The dolphin discussion below inadvertently reminded me of a commencement address given at Ashland a few years ago by Dr. Julian Earls of NASA. Having attended quite a few commencements, I think it was the best address I have heard. Brilliant, eloquent, and understanding. At one point he addressed the subject of human beings:

It's not often that physicists get asked to address non-technical topics. But the reason we don't falls squarely on our shoulders because so often we forget the real reason we're here on this earth. That was made crystal clear to me a few years ago when our oldest son was in high school. He asked me for the definition of a human being, but he wanted it in engineering terms.

The definition I gave him was: A human being is a completely self-contained totally enclosed power plant, available in a variety of sizes and colors, and reproducible in quantity. Humans are relatively long-lived, have major components in duplicate, and science is rapidly making progress towards solving the spare parts problem. Humans are waterproof, amphibious, operate on a wide variety of fuels, enjoy thermostatically-controlled temperatures, circulating fluid heat, evaporative cooling, have sealed and lubricated barriers, auto and optional directional range finders, sound and sight recording, audio and visual communications, and are equipped with the sophisticated control center called 'The Brain.'

And when I was through with that description, it became significant to me for what has been omitted. What goes beyond the mere fact of this robot's existence and turns it into a human being? What makes it different from such mechanical marvels as the Viking Lander, the Pathfinder Lander, or the Spirit and Opportunity Rovers on Mars? Ladies and gentlemen, the meaning of being human is the most significant of all subjects. Science will never be able to reduce the value of human commitment to a formula. It will never be able to reduce the value of respect one for another, love one for another, support one for another, to arithmetic. The challenge of accomplishment in living, the depth of insight, the inter-beauty and truth-- these things shall always surpass the scientific mastery of Nature.

Or, as I tell my colleagues, you can have all the technical knowledge in the world at your fingertips, but if you aren't a caring human being, you're the most dangerous creature on Earth, and the most unfulfilled.

Apples of Gold in Pictures of Silver

The latest Letter from an Ohio Farmer considers--with the help of Madison and Lincoln--the relationship between the Declaration of Independence and the Constitution, and the rich legacy they bequeathed to us.
Categories > Refine & Enlarge
11:58 AM / September 21, 2011
Link to this entry | Trackbacks | Discuss (0) | Share | RSS

Congress and the Constitution

Robinson's note below, and the fact that we are moving toward Constitution Day--reminds me to bring to your attention the latest Letter from an Ohio Farmer, appropriately entitled, Congress and the Constitution. It makes the case that Congress is at the very heart of our experiment in constitutional self-government.  You should subscribe to the Farmer's Letters, if you haven't already done so.
Categories > Refine & Enlarge
9:45 AM / September 15, 2011
Link to this entry | Trackbacks | Discuss (2) | Share | RSS

Michael Ramirez on the tenth anniversary of 9/11: 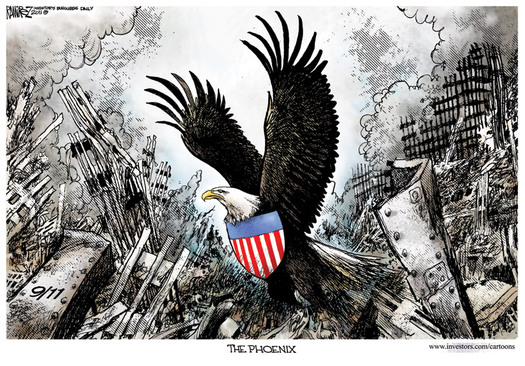 And while it may be a small story in light of all of the other events of 9/11, here is a beautiful and characteristically American story about the Boatlift that took place that day in lower Manhattan.
Categories > Refine & Enlarge
7:37 PM / September 11, 2011
Link to this entry | Trackbacks | Discuss (5) | Share | RSS

If prose is a potato and poetry is a bird, then both these items are birds.  The first is Billy Collins reading his poem one year after 9/11 (he was then the Poet Laureate): The Names.  And here is a Letter from an Ohio Farmer reflecting on what has not changed since 9/11, it is called the Regime of Liberty.
Categories > Refine & Enlarge
9:40 AM / September 9, 2011
Link to this entry | Trackbacks | Discuss (0) | Share | RSS

The Best Format Yet for GOP Aspirants

Posted in Presidency by Ken Thomas

Professor Robert George of Princeton will moderate and question the South Carolina GOP candidates forum.  He is a man of rare substance and grace, who can get to the heart of the matter with few words.  (Read the profile on him in the NY Times Sunday Magazine--damning him with faint praise:  "the reigning brain of the Christian right.")  Having precepted for him years ago at Princeton, I can attest to his ability to get skeptical students to consider questions they would never have thought about otherwise.  If the forum gets boring, I hope Robby pulls out his banjo....

Other candidate forums should consider such non-traditional talent (get the press out of there!):  Peter Schramm of Ashbrook, Larry Arnn of Hillsdale, Brian Kennedy of the Claremont Institute--each could perform such a role superbly and enrich political discussion for not only Republicans but for the general public as well.

Reading the tea leaves, I suspect that the Tea Party Republican transformation I observe in the post below in Wisconsin and Washington will eventually shift the entire culture and balance of political power in America. I mention a single example today in my home-away-from-home at Intellectual Conservative.

Noting that "the U.S. Postal Service is a barometer of big-government, socialized policies," I find it unsurprising that it is "a failed business." What is surprising is the Postmaster General's strong stance against the congressional regulations and labor unions which are crippling the USPS's ability to compete in the free market (despite monopolistic advantages awarded by Congress).

the postmaster general threatened on Friday to break labor contracts in order to lay off 120,000 workers and to revoke employee health and retirement plans in favor of cheaper alternatives. These measures are "threatened" because they do not represent the postmaster general's hopes, but rather his Tea Party inspired strategy to coerce Congress into loosen its strangling regulations and labor unions into reasonable compromise.

Apparently, the postmaster general took notice of the Tea Party's debt-ceiling strategy and concluded that the only way to get Congress to act on a crisis is to propose an even worse ultimatum. . . .

The Postal Service is also taking a cue from the Tea Party's influence in Wisconsin by staking out an opposition stance to public sector unions. Breaking union contracts would have been unthinkable in the pre-Tea era.

As they say, please RTWT.

From Woodstock to Waterloo in Wisconsin and Washington

George Will updates the situation in Wisconsin, where Scott Walker's "budget repair" bill "already seems to have repaired many communities' budgets, in addition to the state's."

Will compares Wisconsin's liberals to Woodstock hippies, but I'd suggest they are only a few steps from the London rioters. They show a frightening propensity to resort to "revolution" and anarchy. The gang assembled outside (and inside) the Capital threatened violence, destroyed property and attempted to bring down the democratically elected government (with trespassing mobs disrupting legislative sessions and politicians abandoning their duties by fleeing in the night to another state). All because liberals The Democrats should still be apologizing in shameful contrition for the behavior of their thugs in Madison.

Nevertheless, Will explains that union attempts to extract vengeance through extravagantly expensive, yet unsuccessful, recall elections have actually fiscally crippled their power even further. Unions just seem unable to appreciate that money is a limited commodity and that there are limits to what money can buy.

Leaving unions aside (as Americans seem to be doing with increasing frequency), Will turns to Walker's broader success:

Walker has refuted the left's sustaining conviction that a leftward-clicking ratchet guarantees that liberalism's advances are irreversible.

Peter Schramm made a similar observation in reference to John Boehner's success in shifting the national conversation to "fundamental constitutional questions."

Boehner and his Republican troops have disproved an assumption held by progressives and liberals since the New Deal: that government will always grow in size and scope, that all spending increases are permanent.

From the victory in Wisconsin against liberal unions to success in Washington curbing liberal tax-and-spend policies, Republicans seem to be riding the Tea Party wave to political transformation. This is a profoundly important lesson for the next Republican presidential candidate to keep in mind.