At a time when many Americans felt down on the future of their country, French President Nicolas Sarkozy brightened their spirits in this stirring address before Congress. It reminded Americans of the uniqueness of their enterprise, and how foreigners admire us.
Categories > Foreign Affairs
6:24 PM / May 7, 2012
Link to this entry | Trackbacks | Discuss (3) | Share | RSS

Posted in Religion by Ken Thomas

Bob Reilly takes on neo-conservative Middle East expert Reuel Marc Gerecht in today's Wall Street Journal. Reilly points out that a presupposition of democracy is solution of the religious issue--that is, freedom of conscience. That is, the American model remains the most reasonable means of establishing democratic self-government.

Looking for a cheap lunch at a favorite Vietnamese restaurant, got an education instead. 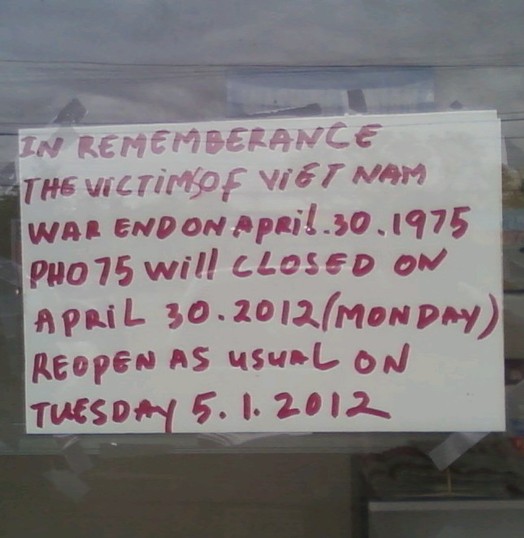 The Politics of the OBL Killing

Posted in Presidency by Ken Thomas

What has been underappreciated about Obama's decision to kill bin Laden was that he had planned it out in his mind years before. During the 2008 campaign he made news--e.g., this commentary--by declaring he would not hesitate to violate Pakistan's sovereignty if necessary. Obama must have asked himself what he could do to project foreign policy strengths while maintaining internationalist credentials. The most politically popular goal was to get Osama, and he reverse-engineered how this might happen: increased drone strikes, for one. When intelligence connected enough dots, he made his move, and he won. This victory of course does not excuse a multitude of other sins, all intended to force America into multilateral agreements, even in a good cause (e.g., Libya). If anything, the killing of bin Laden is the exception that proves the rule about Obama's often feckless foreign policy.
Categories > Presidency
12:32 PM / April 30, 2012
Link to this entry | Trackbacks | Discuss (3) | Share | RSS

Among the most egregious and apparently corrupt aspects of Obamacare is the widespread waivers which excuse Obama's allies and big donors from complying with the more burdensome and expensive regulations of the act. Not only does this represent political cronyism at its worst, but it also presents an unparalleled intrusion of governmental favoritism into private financial markets. Obama has effectively told America that any business or corporation which doesn't support his party will be punished with targeted regulation to which their left-leaning competitors will be excused.

Now comes confirmation that Obama has given a waiver to another liberal darling: Palestine. The Palestinian Accountability Act stipulates that "no funds available to any United States Government department or agency ... may be obligated or expended with respect to providing funds to the Palestinian Authority." Congress froze $192 in aid when Palestine petitioned the UN to recognize Palestinian statehood last year - that was shortly after it was revealed that Palestine was using U.S. aid dollars to pay the "salaries" of Arabs imprisoned in Israel for terrorism.

Obama has now given Palestine a waiver, excusing them from U.S. law.

The AFP news agency quoted White House spokesman Tommy Vietor as saying the $192 million aid package would be devoted to "ensuring the continued viability of the moderate PA government under the leadership of [Palestinian Authority] President Mahmoud Abbas and Prime Minister Salam Fayyad."

So Obama is defying - that is, waiving - American law in order to benefit Palestine in their hour of antagonism toward America. One is left to wonder which moderate PA government policies Obama hopes to keep viable through American funding.
Categories > Foreign Affairs
8:39 AM / April 28, 2012
Link to this entry | Trackbacks | Discuss (0) | Share | RSS

The Czech Republic survived a vote of no confidence on Friday, whereas the Romanian government has fallen. Both countries are implementing austerity measures which domestic leftist movements deeply oppose. (Sound familiar?) The Czech Republic has increased sales and income taxes and introduced modest university fees (which will likely never disappear, now that they have been successfully introduced - signaling an end to "free" college education). They have also proposed deep spending cuts.

Romania, on the other hand, has failed to accept austerity measures and courts political chaos.

Romania took a €20 billion ($26 billion) bailout loan from the International Monetary Fund, the European Union and the World Bank in 2009 when its economy shrank 7 percent. The government has hiked the sales tax to 24 percent and slashed public sector wages by one-fourth in 2010 to meet the conditions of the loan, angering many Romanians.

The IMF and European Commission said in a statement they expected Romania to "continue to observe its economic policy commitments to its international partners."

Whether Romania will comply with the former government's international obligations is an interesting question. And whether Romania presents a potential trend of ruling party collapses is another interesting question. The Czechs seem to have barely avoided such a fate, but France seems likely to depose Sarkozy in light of the continuing fiscal crises and subsequent French unemployment. With Spain at 24% unemployment and Greece still circling the drain, Europe remains a fragile enterprise.
Categories > Foreign Affairs
5:52 AM / April 28, 2012
Link to this entry | Trackbacks | Discuss (1) | Share | RSS

The UN also demands an immediate halt to the violence that has been steadily escalating since the UN's cease-fire took effect last week.

Cristina Kirchner's Argentina is a socialist-lite South American dictatorship-in-the-making - a country increasingly modeled after Hugo Chavez's full-fledged socialist dictatorship in Venezuela. As a soft-socialist, Kirchner has nationalized sparingly - relying instead upon onerous regulation and government interference in the private sector in order to ensure "social democracy." As of late, however, her ambitions have been less subtle.

Facing intense criticism over the nationalization of its biggest oil firm, Argentina on Thursday ordered the seizure of YPF Gas, another group controlled by Spain's Repsol, a move expected to further inflame tensions.

When criticized for expropriating an oil firm, respond by seizing a gas firm. That'll teach 'em.

The move postures Argentina in direct conflict with Spain, the U.S., the EU and the IMF. But such is par for the course for socialist regimes - when the going gets tough, take what belongs to someone else. As Margaret Thatcher was fond of saying, "The problem with socialism is that eventually you run out of other people's money." Others would do well to stop placing their money within Ms. Kirchner's reach.

In fact, that same principle may apply to those in America who have a penchant for spending other people's money.
Categories > Foreign Affairs
3:54 PM / April 20, 2012
Link to this entry | Trackbacks | Discuss (1) | Share | RSS

War is Still the Answer

The world is a scary place. Within the last week or so, North Korea tried to shoot a nuclear-capable rocket over my head, India boasted the ability to nuke China's major cities and the Sudanese have fully embraced a quasi-civil-war. It seems that arms races, whether high tech or low, are still the means by which countries seek to resolve differences and strategically position themselves for international diplomacy.

I believe it is safe to say that the UN has been an unmitigated failure in its primary mission to achieve world peace. Of course, that was a tall order to begin with. The EU has been generally stable in Western and Central Europe - although, following the two world wars for which that area is chiefly responsible, they were due for a few years of peace and we should wait a little longer to determine if theirs is to be an enduring peace. It is a fretful thought to consider that modern terrorism has not actually replaced traditional nation-based warfare, only accentuated and complemented it.

The world presently attempts to provide disincentives for arms-races and war-like aggression in the form of sanctions, but they have proved largely ineffective. Sanctions often weigh heaviest on the weak and ignorant. Further, poverty breeds desperation. It has always been rich and powerful nations which (after a bit of conquering and colonization) have instituted lasting peace. Such is was during the Pax Romana, Pax Ecclesiae and Pax Britannica. Attempts to equalize nations - or, in Obama's words, to level the playing field - foolishly seek to depress nations into a posture ripe for conflict.

Until we find a better trans-national solution or men are ruled by their better angels, my hope for world peace remains the pragmatic Pax Americana. Our abdication of the leading role in peace-keeping through superior diplomatic, economic and military power destabilizes global truces and imperils world peace. America as "world policeman" is still the best option on the table.
Categories > Foreign Affairs
2:39 PM / April 19, 2012
Link to this entry | Trackbacks | Discuss (4) | Share | RSS

... if the CIA is publicly "seeking authority to expand its covert drone campaign in Yemen?"

Of genuine interest, however, is the requested expansion of the CIA's authority to launch "strikes against terrorism suspects even when it does not know the identities of those who will be killed."

Securing permission to use these "signature strikes" would allow the agency to hit targets based solely on intelligence indicating patterns of suspicious behavior, such as imagery showing militants gathering at known al-Qaeda compounds or unloading explosives.

But don't go thinking we're entering a brave new world or anything.

The practice has been a core element of the CIA's drone program in Pakistan for several years.

I wonder if that's also a covert action.

Obama's declined such a request last year, but seems poised to acquiesce in light of the troop draw-downs in the Middle East. Yet "signature strikes" against unidentified persons was certainly not on Obama's to-do list when he ran for president. It's good to see a liberal "evolve" in office in the "right" direction, for once.