Words I might never have expected to say, until Miss Michigan Rima Fakih, a Lebanese immigrant, became the first Muslim Miss USA. This is the greatest blow I've seen to the Arizona law cracking down on immigration. Open the gates, I say!

Perhaps her ascension is a matter of political correctness, affirmative action, savvy Trump-style business strategy - but, really, who cares? Though I'm sure her rise speaks to the dynamic and diverse American political something something something.... Here's the picture. 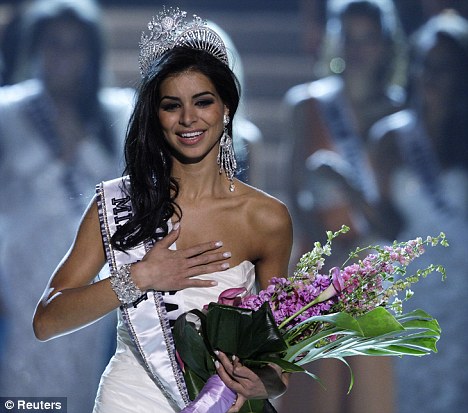 And a cover photo of Miss Michigan and our own Miss Ohio, Amanda Tempel. Go Buckeyes!

UPDATE: Perhaps it's only fair to note that Miss USA, whose last successful contest was a pole-dancing contest at a strip club, was viewed as a more worthy representative of the USA than runner-up Miss Oklahoma, who may have been penalized for her support of "states rights."

I can't believe this post actually evolved into politics.

Or maybe she was just the hottest and smartest?

You have too much time on your hands!

How long before some mullah jackass issues a fatwa against her? Also, God bless Islam? Really?

You refer to an Arizona law cracking down on immigration. When did this occur? I know of the law concerning ILLEGAL immigration, but nothing concerning immigration itself. As a LEGAL immigrant (with the hard-won papers to prove it) there is a big difference (as you truly know) and it insults all of us who followed the rules to infer otherwise.