Posted in Men and Women by Justin Paulette

I spent the weekend in Birmingham, Alabama, visiting several sites of historic significance to the civil rights movement. Most notable, of course, was the 16th Street Baptist Church. After the 1963 fire-bombing which killed four children (original Washington Post story here), the church became the moral epicenter of Martin Luther King's work.

Birmingham is also the locale of King's imprisonment in 1963, which inspired the "Letter from a Birmingham Jail." King's powerful reliance on Augustinian and Thomistic thought, as well as the natural law foundation of America's promise to all people, makes the "Letter" required reading for students of American history and political thought. It also exposes the revisionism of liberals in academia who have replaced Rev. MLK with a substitute Dr. MLK. King's civil rights movement was not an academic exercise in human rights, but a religious testimony of God's law. The secularization of MLK is one of the greatest crimes of modern historians. 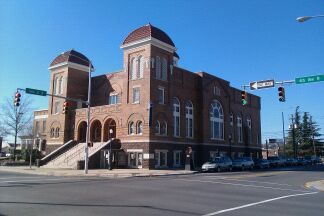 Well done. The secularization of American religion in the social gospel was an even greater crime, ruining the respective purposes of religion and politics, making both dissatisfying to its adherents.