Perry's Got The Babe's Promise

Posted in Economy by Justin Paulette 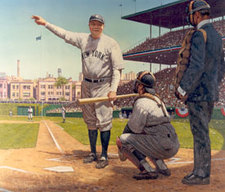 But is there any chance he can deliver?

Well that should be easy enough.

Perry is pointing high into center field (or, in this particular simile, right field). Here are a few details:

Perry is, of course, vying for the right-pole position, with it's spectacular view of the Tea Party Express. He needs energy and is diving to the right (although all of his suggestions are entirely sensible - and perhaps entirely necessary). Whether they are at all plausible absent a miracle in the Senate is another matter altogether - and a question Perry should be asked by the press. In the inevitable failure to pass so ambitious a package, where would he focus?

For the actual liberal media response, read the NY Times' Q&A with Perry. It reveals the liberal obsession with "tax cuts for the rich," or "income inequality." Watch for the media to make their class-warfare obsession the principal talking point against the GOP candidate.